Many hundreds of ornamental onion species exist, but only a modest few have made a name for themselves as garden plants. This text describes the most significant ones. Ornamental onion also includes important plants used for human consumption such as onions, leeks, shallots and the familiar cooking herb, chives. The natural distribution of ornamental onion is limited to the temperate regions of Europe, Asia and the Middle East. The ornamental onions distinguish themselves by their great diversity in colour, inflorescence and flowering height. Many species bloom in early summer – just after the spring-flowering period and just before the exuberant full bloom of summer. When slightly bruised, the flower bulbs, leaves and stems of these plants give off a definite onion scent. Although this has been considered a problem when using ornamental onions as cut flowers, the odour quickly disperses after the stems have been immersed in water for a few moments. Naturally, only the tall and middle-tall species are used as cut flowers. Several species require a bit of special treatment, but will remain beautiful for a long time, even as dried flowers. All species can be used in the border. Certain small species are just perfect for a rock garden, and several lend themselves to naturalising.

The botanical name of ornamental onion ‘Allium’ (sometimes spelled as ’alium’) comes from the ancient Romans and means ’onion’ or ’leek’. This name was taken over by Linnaeus for the entire genus.

How many ornamental onion species are recognised?

The literature mentions various numbers of ornamental onion species ranging from 280, to 300 to even 450. Here again, the interpretation of the meaning of ’species’ plays a role in this. DilysDavies, the author of a recently published book, Allium, mentions between 800 and 1000 species and cultivars. Of this total, the number of cultivars is proportionately fairly small. In other words, most species have no cultivars. Worth mentioning is the fact that the species previously known as Allium bulgaricum or Allium siculum ssp. bulgaricum now belongs to a separate genus, Nectaroscordum.

We have to make a distinction between the plants cultivated for their ornamental value and those grown for consumption purposes. Ancient books mention the fact that onions, the prototype of which came from Iran, were already being cultivated 8000 years before Christ, so this adds up to a period of about 10,000 years! Other species such as Welsh onion (A. fistulosum) have been cultivated in our regions since 1583. Dates for some of the ornamental species are known as well: A. sphaerocephalon: 1753; A. triquetrum: 1789; A. schubertii: 1843; A. karataviense: 1878; A. giganteum: 1873; A. atropurpureum: 1800; and A. aflatunense: 1902.

Many ornamental onions have a scaled bulb which will flower for more than one year. Depending on the species, the bulb will have a circumference ranging from 3 to 30 cm. Some species, such as certain herbs, have a thickened root or ’stem’ growing under the ground as do leeks. The colour and shape of ornamental onion flower bulbs are generally not very remarkable. The tunic is sometimes extremely loose-fitting (Allium christophii) and at other times very hard (Allium schubertii, with its parchment-like tunic).

All ornamental onion species require a well-drained soil. A sunny habitat is best for most species, but a few also grow beautifully in full or partial shade.

Ornamental onions are definitely displayed at their loveliest when placed among perennial plants in the border. Their leaves, which are usually not very attractive and which also wither back quickly after flowering, will then be hidden beneath the leaves of the perennial plants. The tall ornamental onions in particular are very impressive when towering up above lower-growing plants or ground covers. For small gardens, plant five specimens of tall ornamental onions as a group. Their violet, purple and lilac colours displayed by their often globe-shaped inflorescence make a gorgeous contrast to the less compact inflorescence of most perennial plants. Increasingly more attention should be given to ornamental onions when making planting plans. Several of their species can create a transition bridging the flowering periods of the real spring-flowering bulbs with that of the summer-flowering bulbs. What’s more, the earliest-flowering ornamental onions can be combined with tulips, hyacinths and narcissi, while the ones flowering latest can be planted with gladioli and dahlias. These later-flowering ornamental onions are therefore quite useful for combining with the frequently brightly-coloured annual plants. Small species such as Allium ostrowskianum, Allium moly, A. flavum and Allium cernuum can find a little spot in the rock garden.

Using them for naturalizing is a story in itself. Even so, it can be mentioned that Allium ursinum is the most suitable for this purpose. These are best used in the wild garden featuring native species where they should be planted in a lightly shaded location in moist soil.

The tall ornamental onions cannot be considered for this purpose, of course, and the growth habits of the lower-growing ones are a bit too untidy to allow them to play a solo role in containers. Another disadvantage is that the foliage quickly becomes unattractive. Actually, there are only a few ornamental onions that can be planted in pots: Allium christophii, Allium schubertii, and possibly Allium karataviense. These three excel due to their striking round inflorescences while not growing too tall (20-50 cm). The pot used to hold them should be at least 20 cm deep. The bulbs themselves are planted at a depth of 8 to 10 cm in well-draining soil. The pot should be protected against hard frosts; Allium schubertii is especially susceptible to frost damage. 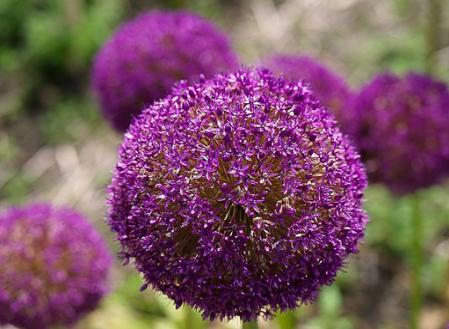