Flowering period: March – May, depending on the species

Planting depth to base of bulb: 5 inches

Landscape uses: borders, rock gardens, and under shrubs and trees

The genus, Muscari contains about 30 species. Some of these, such as M. botryoides and M. comosum, originated in the Mediterranean region, while others of this genus can be found in their natural habitats in Asia Minor and the Caucasus. Most species are so extremely winter hardy and easy to grow that no garden should be without them.

Muscari planted in a favorable location where no water can settle during the winter can naturalize easily. One drawback, however, is that the leaves often emerge before the winter season. The frost damage thus produced remains visible during the flowering period although the flowers themselves are seldom damaged. A famous planting of them at Keukenhof gardens in Holland is known as the “blue river”; this is a dense planting of muscari that winds through the shrubs, some of which bloom at the same time. Year after year, this is one of the most photographed scenes in this spectacular park. The species used in this location is Muscari armeniacum, the most familiar of the grape hyacinths and actually the only one that has a right to that name.

Grape hyacinths make outstanding border plants where they are shown off very well when planted among perennial plants. This goes for the border containing various colors, but especially for color coordinated borders and blue borders in particular. Always plant plenty of bulbs (at least 25) in a group to obtain a pleasing visual effect. A spot under deciduous shrubs is another place where grape hyacinths will be attractive. After all, the flowering period for grape hyacinths comes at a time when the shrubs are still bare. Using grape hyacinths as bedding plants is not done so often anymore, although they are obviously perfect for fulfilling this role. For such a massive color effect, they have to be planted closely together. Bedding arrangements using combinations of late-flowering yellow daffodils and red tulips, for example, are very pretty.

Many muscari species are also perfect for planting in containers, although the species we most commonly see used this way is M. armeniacum. All kinds of combinations are imaginable, but perhaps the use of miniature daffodils and low-flowering tulips is the most eligible. 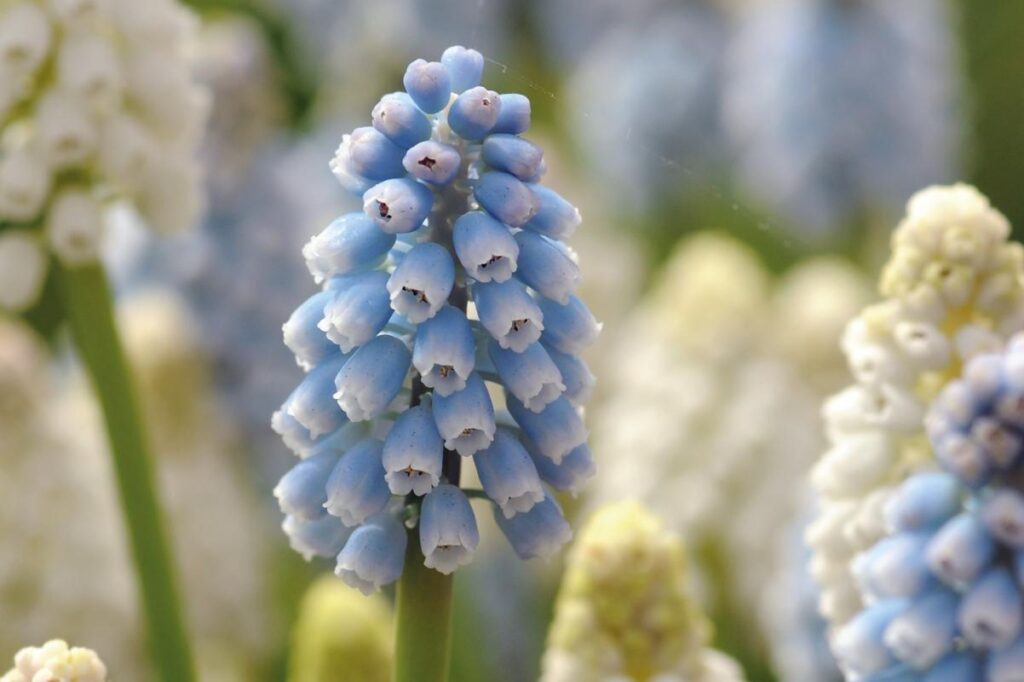